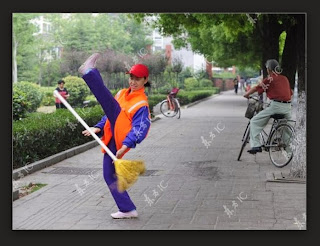 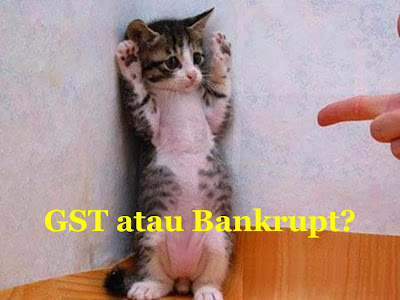 Rakyat balas: It's either changing Najib or facing brankruptcy.

Dipetik dari blog out side the box.

A couple of years back I blogged that the Cabinet Ministers should not make any statements in public. They say the most ridiculous things.

Here is a list of things they have said and then flip flopped or back tracked about over the past seven days.

1. The JAKIM Minister wanted guns for the religious enforcement guys. He thought it was a good idea. Fortunately there was a huge outcry including a wise comment by the Tengku Mahkota of Pahang. So they flip flopped and back tracked. Seeing the booboo, suddenly it became "just a suggestion", 'just an idea' and crap like that. Once they look foolish in public, everything becomes 'just an idea', 'just a thought'.

2. The same religious guys have been talking about controlling religious discussion on the Internet.  How dumb can you get? How are you going to control the Internet except if you shut it down. This is what Iran has tried to do but unsuccessfully.

3. Then some fellow from MIROS or something said that cars that are more than 12 years old will not be allowed on the roads anymore. Again it caused an outcry. Why 12 years? Why not 15 years or 10 years? Ada scientific logic ke?  Atau ini pun termasuk dalam kategori "tidak boleh gunakan akal"?

When the outcry was loud enough again the gomen backtracked. Flip flopped. They said,

"Putrajaya today killed off a suggested 12 year-age limit on cars, following concerted pressure from the opposition and uproar from the used-car industry.  Deputy Transport Minister Datuk Abdul Aziz Kaprawi suggested that the proposal was only a study and that there was never a definitive proposal.."

Flip flop again. The moment people complain it becomes, "just a proposal, only a study". This means the gomen does not study things carefully before they lepas angin busuk in public.

4. Then the DBKL came out with this ridiculous 200% increase in assessment rates. Ini mabuk apa dong? Who raises rates, quit rent etc by 200%?  Ok saya setuju the rates have not been raised for 20 years. Why? Why were the rates not increased for 20 years?

Why not raise a steady 5% every three years or five years? Why wait 20 years and whack the people with a 200% rise?

What happened to "Rakyat Di Dahulukan"? Then when everyone complained, especially the Opposition Parliamentarians, the gomen gostan. Flip flop. Now DBKL says, "it is just a proposal. Bukan implement lagi". Ku Nan now says that the increase will be reduced - maybe 70% only. Not 200%. Flip flop lagi.

And here we must thank Tengku Adnan's wife because according to Ku Nan his wife also complained because she also owned "a few properties" around Kuala Lumpur.

Well arent we all so lucky? If Ku Nan's wife owns even more properties around KL, can the rates go even lower? This is what the public will come to think. Pasal apa pula? Sebab Ku Nan dah kata bini dia pun complain. Itu pasal lah.

5. Today we read about this Lizard King fellow in Penang who was fined for dealing in exotic animals, endangered species and such. The gomen had said that all his permits had been cancelled. Well Al Jazeera (of all the TV stations) has made an expose. The guy is back in business. Here is The Star :
And what did the gomen say? Here is Palanivel the Minister of the Environment (May Allah save us all)

Palanivel (said) he was unaware of Wong’s infamy
I do not know who this person is.
I have never come across him.
Only today was I told of this chap
he would not know if Wong had resumed his activities
people could do things illegally without the ministry’s knowledge
go after top-level officials if they were suspected to be Wong’s accomplices, Palanivel said: “I won’t know, because sometimes things can go without my knowledge.”

Listen to the Minister's language :  "he was unaware, I dont know, never come across him, would not know, I wont know, without my knowledge."

How can new permits be issued to the same parties (of course lah they will use different identities, front companies etc. These people were not born yesterday). Jangan pula gomen pura-pura bodoh.  Now Palanivel is also flip flopping.

Folks, it is basic etiquette ok - you dont lepas angin busuk in public. That is NOT a nice thing to do. Kalau nak lepas angin busuk you go and do it somewhere private where it will not cause the public to pengsan.

Unfortunately this is what the gomen has been doing. They lepas angin busuk in public. Then when people complain about the stink, they quickly flip flop, retract, deny, gostan, make excuses and all sorts of crap.

This is evidence enough that the Ministers do not know their job. They dont know what they are doing or saying. Just pakai hentam saja. Say something without thinking. When the people complain then flip flop.

Here is the soalan cepu mas : so what do the Ministers really do?
at 7:16 PM No comments: 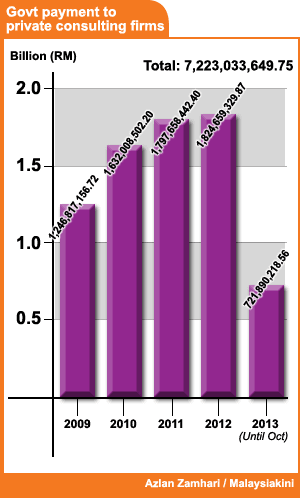 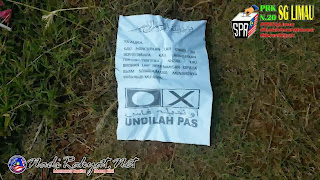